SNEDEKER WINS IT ALL
Brandt Snedeker got hot down the stretch to pull away from the field and win the TOUR Championship by Coca-Cola, shooting a 2-under 68 to finish at 10 under, three strokes ahead of Justin Rose. Since Snedeker was also in the top five in points coming into East Lake, the win also guaranteed him the FedExCup, now in its sixth year of existence.

LEWIS BEATS THOMPSON IN ALABAMA
Stacy Lewis won the Navistar LPGA Classic on Sunday for her third LPGA Tour victory in five months, closing with a 3-under 69 to beat defending champion Lexi Thompson by two strokes.

Lewis parred the final two holes after a 12-foot birdie putt on No. 16 gave her the final cushion, and Thompson shot a 66 on The Senator course at the Robert Trent Jones Golf Trail's Capitol Hill complex.

GUTHRIE WINS SECOND IN A ROW
Luke Guthrie fired a 6-under 66 on Sunday to win the WNB Golf Classic and deny Danny Lee his second straight win at this event.

Guthrie, who also won in Boise last week, finished at 17-under-par 271.
Lee managed an even-par 72 to end one back at minus-16. He was joined in second place by Cameron Percy, who shot 70 in the final round.

NEWS & NOTES
Fred Couples, a former Masters champion and one of the most popular figures in the game, was elected into the World Golf Hall of Fame on Wednesday.

Couples described himself as a good player, but not a great player, though he's turned in some amazing performances.

According to the Irish Times Rory McIlroy is selling his home located in Moneyreagh, Northern Ireland,for $3.24 million, just three years after he purchased the property.

The 14-acre estate includes a 6,000-square-foot home with  a pond and a golf practice area with four greens and a driving range.The short game area has a replica of the Road Hole on the 17th green on the Old Course at St. Andrews, and comes with a full-time greenskeeper who looks after the facility.

The Scottish Open will move to Aberdeen in 2014 after a third and final year at the Castle Stuart Links course in Inverness.

Organizers say Royal Aberdeen Golf Club in Balgownie will become the eighth different venue to host the tournament that many players use as a warm-up for the British Open, the year's third major.

And at http://TGWG.podomatic.com
Stitcher Smart Radio (get the free app at stitcher.com/talkinggolfwithgary)
itunes
Flipboard

Couples described himself as a good player, but not a great player, though he's turned in some amazing performances.

Among his 15 wins on the PGA Tour are the 1992 Masters and two at The Players Championship, including an eagle-birdie-par finish in 1996. He played in the Ryder Cup and Presidents Cup five times each, and next year will be captain of the Presidents Cup for the third time. He was No. 1 in the world for four months in 1992.

Couples was elected on the PGA Tour ballot with a record-low 51 percent. The minimum for election is 65 percent, although there is a clause that when no one gets the minimum, the leading vote-getter is elected provided he has at least 50 percent of the vote. 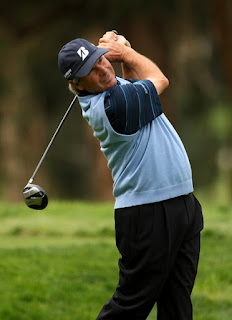 But the bottom line whatever the vote he is still Hall of Famer Fred Couples!


Listen to my podcast weekly here click on the podcast tab
Or at http://TGWG.podomatic.com
Stitcher Smart Radio (get the free app at stitcher.com/talkinggolfwithgary)
itunes
Flipboard

Follow me on twitter @talkgolfgary
Visit my online store at www.zazzle.com/talkinggolfwithgary*
Send your questions and comments to talkinggolf@gmail.com
Posted by Gary Mack at 10:32 AM No comments:

Forgot again to mention a faithful listener and friend of the site, Gerry from Long Island. Gerry's pick for the Tour Championship is Phil Mickelson and with that win Phil would also win the FedEx Cup. So good luck Phil and thanks to Gerry.

Listen to my podcast weekly here click on the podcast tab

AND THE WINNERS ARE...

SHIN MAKES IT 2
Ji-yai Shin romped to victory at the women's British Open on Sunday, carding a final-round 73 to win her second major by a  nine shots in awful weather at Royal Liverpool, England.

She was the only player to finish under par for the tournament, ending on nine-under 279 to complete an Asian sweep of the year's four women's majors.

FERNANDEZ-CASTANO TAKES ITALIAN OPEN
Spain's Gonzalo Fernandez-Castano fired an 8- under 64 on Sunday to come from behind and capture the Italian Open for a second time.

Fernandez-Castano finished at 24-under 264 and bested third-round leader Garth Mulroy by two at Royal Park I Roveri. Mulroy shot a 5-under 67, but two late mistakes cost him a chance at a second European Tour title.

WOOD COMES FROM BEHIND IN HAWAII
Willie Wood birdied the final two holes on Sunday to come from behind and beat Bill Glasson at the Pacific Links Hawaii Championship.
Wood closed with a 6-under 66 to finish at 14-under-par 202. It was his second win in three weeks on the Champions Tour.


GUTHRIE WINS IN BOISE
Luke Guthrie wrapped up a PGA Tour card for next season, winning the Boise Open on Sunday for his first Web.com Tour title.

Guthrie, the 22-year-old former Illinois player who turned professional after the NCAA tournament, closed with a 6-under 65 for a four-stroke victory. He opened with rounds of 64, 71 and 62 and finished at 22-under 262 at Hillcrest Country Club.

SECOND ROUND OF WOMEN'S BRITISH OPEN BLOWN AWAY

Deplorable conditions marked the second round of the Women's British Open Friday so much so that all scores were considered null and void. From the Golf Channel.
http://www.golfchannel.com/media/golf-central-friday-feature-1/

Arnold Palmer became just the sixth athlete to receive the Congressional Gold Medal during a ceremony in his honor Wednesday in the Rotunda of the Capitol Building in Washington, D.C.

Rory McIlroy wins second tournament in a row at the BMW Championship.  Peter Hanson cashed in won the KLM Open. Jiyai Shin won the Kingsmill Championship outlasting Paula Creamer in the longest playoff in LPGA history. For a full recap of all these stories listen to my podcast weekly right here.

Listen to my podcast weekly right here (right sidebar)
And at http://TGWG.podomatic.com
Stitcher Smart Radio (get the free app at stitcher.com/talkinggolfwithgary)
itunes
Flipboard
Visit my online store at www.zazzle.com/talkinggolfwithgary*
Send your questions and comments to talkinggolf@gmail.com
Posted by Gary Mack at 7:10 AM No comments:

HAS VIJAY FOUND THE FOUNTAIN OF YOUTH?

Vijay Singh is 49 years old and has been some of the best golf we've seen him play in a long time. He is currently in the lead of the BMW Championship and has been in trouble but like Houdini he keeps escaping. A chip in for par, long lag putts all done with the grace and competiveness of a Hall of Fame golfer. Vijay  the Champions Tour will have to wait it doesn't look like he's ready for them yet..

Listen to my podcast weekly right here (right sidebar)
And at
http://TGWG.podomatic.com
Stitcher Smart Radio (get the free app at stitcher.com/talkinggolfwithgary)
itunes
Flipboard
Visit my online store at www.zazzle.com/talkinggolfwithgary*
Send your questions and comments to talkinggolf@gmail.com
Posted by Gary Mack at 6:34 PM No comments:

Davis Love picked his final four spots for the Ryder Cup today.  His picks are Steve Stricker, Jim Furyk, Dustin Johnson, and Brandt Snedeker.  Davis wanted to fill holes, for experience he picked Furyk, for a hot putter Snedeker, long hitter and best athlete Johnson, and all around experience Stricker.


Checkout a great audiobook offer at audiblepodcast.com/talkinggolfwithgary
Follow me on twitter @talkgolfgary
Listen to my podcast weekly right here (right sidebar)
And at http://TGWG.podomatic.com
Stitcher Smart Radio (get the free app at stitcher.com/talkinggolfwithgary)
As well as on itunes
Now on Flipboard
Visit my online store at www.zazzle.com/talkinggolfwithgary*
Send your questions and comments to talkinggolf@gmail.com
Voicemail, Comment Line 516 619 6341
Posted by Gary Mack at 10:39 AM No comments:

MCILROY WINS DEUTSCHE CHAMPIONSHIP
Rory McIlroy hung on to win the Deutsche Bank Championship by one stroke over Louis Oosthuizen and two over Tiger Woods.

In a Labor Day finish that featured some of the biggest names in golf, McIlroy closed with a 4-under 67 and got away with a few mistakes to hold off Louis Oosthuizen . Oosthuizen narrowly missed a 12-foot birdie putt on the final hole that would have forced a playoff. He closed with a 71.

Tiger Woods made a charge on the front nine, though he never got closer than three shots until a birdie on his last hole for a 66. Phil Mickelson finished fourth.

Dustin Johnson had a 70 and likely played his way onto the Ryder Cup team. Brandt Snedeker made a strong case for a captain's pick with a 65-67 weekend to finish sixth.


RAMSAY TAKES EUROPEAN MASTERS
Richie Ramsay captured the biggest title of his professional career Sunday, shooting a 5-under 66 to win the European Masters by four strokes.

The overnight leader was never challenged after the turn and finished at 16-under 267. Four players tied for second.

The 29-year-old Scot, who won the 2006 United States Amateur Championship, is set to move up the world rankings from No. 110 into the top 70.


STREB WINS MYLAN CLASSIC
Robert Streb won the Mylan Classic on Sunday for his first Web.com Tour title, finishing with a 7-under 64 for a four-stroke victory.


NEWS & NOTES
PGA Championship winner Rory McIlroy will be a no show from the elite end-of-season PGA Grand Slam of Golf in Bermuda in October due to a scheduling conflict, organizers said.

McIlroy, who clinched his second major title by eight shots at Kiawah Island earlier this month, had already committed to the European Tour's BMW Masters in China, the PGA of America said in a statement.

The BMW Masters, which was added to the European Tour schedule in April, will be played at Lake Malaren Golf Club in Shanghai from  25-28.


Annika Sorenstam has been appointed vice captain for the 2013 European Solheim Cup team.
Captain Liselotte Neumann announced the selection Tuesday at Colorado Golf Club, which will host the event next August. Carin Koch also was named a vice captain.

Sorenstam filled a similar role in 2011 when the Europeans won the Cup in Ireland. She has played in the event eight times, accumulating 24 points in 37 matches.

The former world No. 1 golfer retired in 2008. Sorenstam had quite a career as she won 90 tournaments, including 10 major championships.

U.S. captain Meg Mallon announced in July that Dottie Pepper will be her vice captain.


Notah Begay III finally was on the winning side in his signature charity event, and it felt so very good.
''Five years! Finally! Great!'' Begay said Wednesday after teaming with Tiger Woods to shoot 9 under.

''I had to get on my partner. He was getting a little lackadaisical out there.''

Woods and Begay, longtime friends and former college roommates at Stanford, helped lead the American side to victory in the NB3 Foundation Challenge at Turning Stone Resort's Atunyote Golf Club.

Woods and Begay took on K.J. Choi and Y.E. Yang in one of three stroke-play matches that were billed as an ''East Meets West'' challenge involving Asian and American players. The other pairings had Woodland and Kerr against Danny Lee and Se Ri Pak, and Fowler and Thompson playing against Charlie Wi and Yani Tseng.


Tom Watson will play in the Australian Open for the first time in nearly 30 years.

Watson's win at Royal Melbourne in 1984 came a year after he won the last of his eight majors, the 1983 British Open at Royal Birkdale, his fifth Open championship. He joined the Champions Tour in 1999 and has 14 wins on the senior tour.