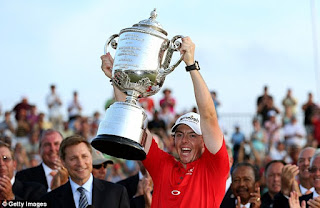 MCILROY WINS PGA CHAMPIONSHIP
Rory McIlroy built a large lead on  Sunday and won the PGA Championship by a record eight strokes over England's David Lynn and by nine over four others.It was the largest margin of victory in a PGA Championship, breaking Jack Nicklaus' record of winning by seven in 1980 at Oak Hill, the site of next year's PGA Championship. And at 23, McIlroy is the youngest PGA Championship winner in its stroke-play history.

McIlroy won his second major, following his eight-shot 2011 victory at the U.S. Open at Congressional Country Club in Bethesda, Md. This time he vanquished the field, including Tiger Woods, shooting a 6-under 66 on Sunday, with no bogeys, to end the week at 13-under par, including birdie on the 72nd hole.

RYU RIDES HOT STREAK TO VICTORY
So Yeon Ryu rode a string of six straight birdies in the middle of her round to a 9-under 62 and a seven-stroke victory in the Jamie Farr Toledo Classic.

Ryu began the day locked in a four-player logjam - all South Koreans - for first place. She took the lead by herself for the first time with an 8-foot birdie putt at the third hole and gradually stretched her advantage until pulling away with birdies on Nos. 9-14.

WILSON WINS PRICE CUTTER CHAMPIONSHIP
Chris Wilson birdied the first playoff hole on Sunday to beat Scott Harrington and win the Price Cutter Charity Championship.
Wilson closed with a 5-under 67 to end at 21-under-par 267. Harrington, who shared the third-round lead, posted a 4-under 68 to force the playoff at Highland Springs Country Club.

NEWS & NOTES
As the defending PGA champion, Keegan Bradley was responsible for hosting a dinner for past champions on Tuesday night. He also had to provide the champions a gift, and the New England native stayed true to his roots.He got each of the champions a Boston Red Sox cap and a 100-year anniversary baseball.

The gift package was topped off by a personalized Red Sox jersey, with the player's name on the back. They were assigned numbers corresponding with the year they won the PGA Championship - 91 for John Daly, 97 for Davis Love, 5 for Phil Mickelson.


Michael Hoey of Northern Ireland was disqualified from the PGA Championship.

Hoey had one of only five rounds under par Friday at Kiawah, and he was to go into the weekend of the final major eight shots out of the lead. But only after he signed for a 2-under 70 did he realize he failed to re-create his lie on the ninth hole after removing his ball from an embedded lie to make sure it was his.

Hoey wiped away sand on the ninth hole. His mistake was not replacing the sand on his ball.

He was disqualified for not including the two-shot penalty, and thus signing an incorrect scorecard. Hoey is the one who brought the oversight to the attention of rules officials.


Michael Phelps, the most decorated Olympian in history, has plans for the next stage of his career: to play the world’s greatest golf courses and improve his game under the eye of Hank Haney.

“The Haney Project” returns in February 2013 with Phelps, a 22-time Olympic medalist in swimming. The announcement was made Saturday by Phelps and Golf Channel president Mike McCarley

If you want to hear more on the stories of the week listen to my podcast weekly right here or at http://TGWG.podomatic.com
Stitcher Smart Radio (get the free app at stitcher.com/talkinggolfwithgary)
As well as on itunes
Now on Flipboard Visit my online store at www.zazzle.com/talkinggolfwithgary
Send your questions and comments to talkinggolf@gmail.com

And checkout my good friend Doc at  golfcentraldaily.com
Posted by Gary Mack at 7:49 PM