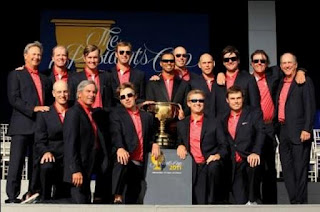 AMERICANS RETAIN PRESIDENT'S CUP
The Americans returned Down Under and won the Presidents Cup.

Jim Furyk became the fourth player to win all five of his matches, and the bottom half of the lineup was strong enough Sunday to give the Americans their fourth straight win in this lopsided series.
Perhaps it was only fitting that Tiger Woods clinched the cup for the second straight time.

U.S. captain Fred Couples was criticized for using a pick on Woods, who had been out with an injury most of the summer and had not won since his personal life crumbled two years ago. Woods played well all week, even if he didn’t always get rewarded with a point. In his singles match against Aaron Baddeley, he was never seriously challenged.

Woods closed out Baddeley, 4 and 3, and the celebration was on.

The Americans won, 19-15, the third straight time they have won by at least four points.
It was a small measure of revenge for the Americans, whose only lost came at Royal Melbourne in 1998. And it was vindication for Couples, who said a month early that he was taking Woods because he was the “best player forever.”

Woods looked as if he was headed in that direction.

The Americans led after each session, and their 13-9 lead going into the final session Sunday was too much for the International team to overcome, even with a loud and boisterous Australian crowd behind it.

DUTCHMAN TAKES JOHOR OPEN
Dutchman Joost Luiten won the rain-shortened Johor Open on Sunday for his first European Tour title, closing with a 6-under 65 for a one-stroke victory over Sweden’s Daniel Chopra.

Luiten finished at 15-under 198 at Horizon Hills in the event also sanctioned by the Asian Tour.
Chopra birdied three of the last six holes for a 70.

Defending champion Padraig Harrington of Ireland tied for third at 13-under along with Wales’ Rhys Davies and England’s James Morrison.

The world number 281 posted a final round four-under 68 to finish on 19-under 269, clear of Murray (67) with four players four strokes further back in third.

Mulroy sparkled on the back nine on Saturday when he carded five straight birdies, and his game was again on song for Sunday's final stretch when he notched up four birdies, including a monster putt for a two at the par-three 16th.

After bogeying the fourth hole, Park birdied three of the next four and parred the final 10 holes.
"She had great composure all day long," Gal said about Park.

Creamer was winless this season.

Gal missed a chance for her second victory of the year.

Top-ranked Yani Tseng shot a 74 to tie for sixth at 2 under.

She won seven times on the LPGA Tour this year and had four other worldwide titles. The Taiwanese star was the Rolex Player of the Year for the second straight year, won her first Vare Trophy for lowest scoring average at 69.66, and topped the money list with $2,921,713.


IN OTHER NEWS
Greg Norman, never one to mince words, had criticized his counterpart Fred Couples for making Tiger Woods a captain’s pick, then watched at Royal Melbourne as one of his, Robert Allenby, failed to win a point in yet another losing cause for the Internationals

But Norman said he has no regrets. He was his usual upbeat self Sunday after the 19-15 loss to the Americans, and said that although he won’t be back as captain in 2013, he might be an assistant if asked.”

The Presidents Cup, which pits the U.S. against teams from non-European countries, has always taken a back seat to The Ryder Cup. And the United States has dominated nine Presidents Cup tournaments since 1994, winning seven times, losing once – at Royal Melbourne in 1998 – and tying in South Africa in 2003.

Norman said he’d like to see changes that would give the host country a say in the format.

He said he’d like to see the foursomes (alternate-shot) matches reduced, as that’s where the Internationals have been traditionally poor because the Americans play that format every year – in Ryder Cup and the Presidents Cup.

What’s wrong with the host nation of having the choice of the format anyway? Any golf tournament has got to be fine-tuned every year.” Norman said.


Tiger Woods won't be starting his 2012 season at Torrey Pines. Instead of his traditional PGA Tour start in San Diego, Woods has agreed to play in a tournament in Abu Dhabi, United Arab Emirates.


The move is somewhat surprising for Woods, taking appearance money for the European Tour event instead of playing what he considers one of his favorite PGA Tour courses. He's won seven times at Torrey Pines as a pro, including his 14th and last major at the 2008 U.S. Open.

Woods has been starting his season at Torrey Pines, when healthy, since 2006. He missed the 2009 and 2010 tournaments because of injuries.

Freeman, a 49-year-old club professional at the Country Club of Orlando and the 1999 PGA Professional Player of the Year, birdied Nos. 4-8 and shot a 6-under 29 on the front nine.

Gary Hallberg and Canadian Jim Rutledge tied for second at 16 under. Hallberg closed with a 68, and Rutledge finished with a 68.
Jeff Hart (67) was fourth at 15 under, and P.H. Horgan III (68) was another stroke back to take the final exempt position—before the reorder—for the 2012 season

Listen to my podcast weekly at TGWG.podomatic.com As well as on itunes
And the show is now available on STITCHER SMART RADIO www.stitcher.com
Visit my online store at www.zazzle.com/talkinggolfwithgary
Send your questions and comments to talkinggolf@gmail.com
Posted by Gary Mack at 6:48 PM