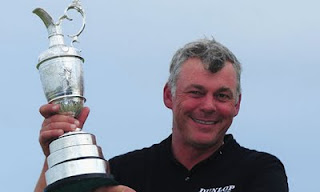 A cigarette curled under his fingers as he walked  the fairways, Clarke held off brief challenges from Phil Mickelson and Dustin Johnson and held up under the pressure until no one could catch him.

Mickelson, who needed only seven holes to made up a five-shot deficit, stepped aside by missing too many short putts. Johnson, in the final group of a major for the third time in the last six, made another blunder with a major at stake. This time, he was two shots behind on the par-5 14th, tried to lay up with a 2-iron and hit it out-of-bounds to make double bogey.

They shared second place, stretching the American drought to six straight majors without winning.
Despite meaningless bogeys on the last two holes, Clarke closed with an even-par 70.

The weather was so wild that heavy rain switched over to sunshine, back and forth all afternoon, in a relentless wind. Clarke was steady through it all, never allowing himself to think about what it mean to hold the claret jug until he stepped onto the 18th green.

With a one-shot lead over Johnson going into the final round, there was a sense that Clarke wouldn’t be able to hold up. But he holed a 12-foot par putt on the first, a downhill 8-footer for par on the third. A 20-foot eagle putt on the seventh, not long after Mickelson made eagle to tie him, gave Clarke the lead for good.

No one had ever gone more than 15 starts in the British Open until winning, and this was the 20th try for Clarke.  He delivered on the demanding links of Royal St. George’s to hold off the two Americans.

Puffing away at cigarettes as he walked  down the fairways, he never looked to be in any trouble. And the few times he did, the golfing gods came to the rescue. He twice hit shots that were headed for pot bunkers well short of the green, only to hop over them or around them, keeping him in control.

He posed with the claret jug that was empty, but not for long. He promised some “nice, Irish black stuff” by evening. And when asked about the celebration, Clarke promised only that it would be “long.”

He finished at 5-under 275 and became the first player in his 40s to win a major since Vijay Singh at the 2004 PGA Championship. Only two other players were older than Clarke when they won their first major Roberto De Vicenzo in the 1967 British Open, and Jerry Barber in the 1961 PGA Championship.

Mickelson’s problems started on the par-3 11th, when he missed a par putt from just inside 3 feet.
He wound up with a 68, which felt more like a 78, and had his seventh runner-up finish in a major.

Johnson had an 8-foot birdie attempt at No. 13 as Clarke went over the green. Instead of a potential two-shot swing, however, Clarke saved yet another par, and Johnson missed his putt. From the middle of the 14th fairway, Johnson tried to lay up with a 2-iron, playing a draw back toward the flag. The wind caught it and took it beyond the white stakes, and Johnson hung his head and dropped another ball in the fairway.

It was another wasted opportunity—the 82 in the final round of the U.S. Open with a three-shot lead, then taking a two-shot penalty on the last hole of the PGA Championship when he didn’t realize he was in a bunker.

Thomas Bjorn, who threw away the British Open in a bunker on the 16th hole eight years ago, acquitted himself nicely. He never got closer than three shots all day, but his 71 put him in fourth place and at least earned him a trip back to the Masters next year.


KIRK TAKES VIKING CLASSIC
Chris Kirk birdied the 17th to break a three way tie for first and won his first PGA Tour event with a one-stroke victory in the Viking Classic, shooting a 4-under 68 to beat Tom Pernice Jr. and George McNeill.

The 26-year-old rookie tied the tournament record with a 22-under performance over four rounds, taking advantage of Annandale Golf Club’s soft greens and fairway. He broke a tie with McNeill on No. 17, hitting a 140-yard approach over water to within five feet of the hole for an easy birdie putt.
The 51-year-old Pernice fell just short in his attempt to become the second-oldest winner in tour history, missing a birdie putt on No. 18.

Kirk is the fifth rookie to win this season—only the second time that’s happened since 1970.

JACK WAGNER WINS CELEBRITY EVENT
Actor Jack Wagner birdied the par-3 17th hole and survived a bogey on the final hole for a 3-point win over Dallas Cowboys quarterback Tony Romo at the American Century Championship. Wagner outscored Romo, 80-77, to become the fourth multiple winner in the event’s 22-year history. The event used a Stableford scoring system where points were awarded for pars or better.

The 51-year-old Wagner, who also won in 2006, led after each of the three rounds. He made 18 birdies over the 54 holes at the 6,865-yard Edgewood Tahoe Golf Course. Wagner shot 69 with seven birdies (worth 3 points apiece) and four bogeys Sunday. Romo shot a bogey-free 66, and his 31 points were a single-round best for the week.


IN OTHER NEWS
Eighteen holes with Phil Mickelson were enough to convince Tom Lewis that he wasn’t ready to turn professional just yet.

Lewis announced himself to the world with a stunning 65 in the first round of the British Open, earning the 20-year-old English amateur a shock share of lead and turning him into an overnight sensation.

His family and girlfriend were suddenly in the British press. Agencies were reportedly lining up for him. The sky was the limit for the kid named after Tom Watson, with whom he played his first two rounds.

Then one round with Mickelson on Saturday, when Lewis shot a 76 in heavy rain and wind, brought him back to reality.

“Playing with Phil made me feel terrible, really terrible around the greens. If you’re going to play with the best players in the world, you have to chip and putt like they do,” Lewis said.

“I’m pretty glad I played with him.”

Still, Lewis hasn’t done too bad this week.
A closing round of 4-over 74 on Sunday helped win him the silver medal for the leading amateur finisher at the British Open. He was three shots ahead of 21-year-old American Peter Uihlein, the only other amateur left in the field.

There was speculation that Lewis was planning to drop his amateur status and immediately become professional. He will delay turning pro until probably after the Walker Cup in Scotland in September.

Notah Begay III Foundation Challenge was originally scheduled for July 5, but was postponed once it was clear Tiger Woods couldn't play at that time.

On Thursday, Begay's foundation issued a press release saying that Woods is among the eight players taking part in the rescheduled event on Aug. 31.

As for the Notah Begay III Foundation Challenge, it takes place at Turning Stone Resort in New York and raises money and awareness for healthcare issues among Native American youth. Other players there will be Begay, Rickie Fowler, Hunter Mahan, Annika Sorenstam, Cristie Kerr, Suzann Pettersen and Natalie Gulbis.


Former NHL All-Star Joe Sakic picked a good spot for his first career hole-in-one - a $1 million two-hopper into the cup on the waterfront par-3 17th at the American Century Celebrity Golf Championship at Lake Tahoe on Sunday.

"That's a shot you never imagine hitting," said Sakic, who won two Stanley Cups and an MVP trophy with the Colorado Avalanche. "I've never even been close before."

For the last three years, any player hitting an ace on the signature hole at Edgewood Tahoe Golf Course earned a $1 million bonus from tourney sponsor American Century, with the Kansas City-based investment company stipulating that half of the prize go to its primary charity benefactor.
So Sakic will split the $1 million with Lance Armstrong's Livestrong Foundation for cancer research.

Sakic said he used an 8-iron for the ace on the 167-yard hole along Lake Tahoe's  waters where dozens of yachts and boats annually set down anchor to catch a glimpse of the action on the course.


Listen to my podcast weekly at TGWG.podomatic.com

As well as on itunes
Send your questions and comments to talkinggolf@gmail.com
Posted by Gary Mack at 7:40 PM