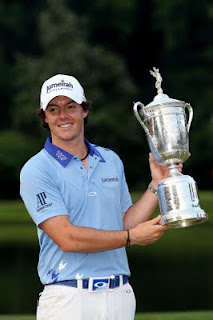 THE U.S. OPEN
Rory McIlroy continued to dominate Congressional Country Club to win the U.S. Open by 8 strokes over Jason Day. The top finishing Americans were Kevin Chappell and Robert Garrigus at -6 ;  ten strokes off of the pace.

In complete control his game, McIlroy never slipped. He won his first major championship by shooting a 2-under 69 at ultra-soft Congressional and closed his four-day onslaught at 16-under 268,  four shots better than the U.S. Open scoring record formerly held by four players, including Tiger Woods and Jack Nicklaus.

McIlroy now joins them on the list of major winners, two months after a collapse so thorough, some wondered if he could ever recover. He took a four-shot lead into the final day of the Masters. But after hitting his 10th tee shot near a cabin on the outskirts of Augusta National, he melted down, shot 80 and finished 15th.

His shot on the 10th hole of this one showed how far he’s come. On the 214-yard par-3, a downhill shot over water, McIlroy knocked the ball above the hole, then watched as it stopped for a split second and started spinning backward, before stopping an inch or two from the hole.He tapped in for a birdie that got him to 17-under par at a tournament that had never seen a score lower than 12 under before Friday.

He ended up at 16 under, coming short of the all-time major record of 19-under par set by Tiger Woods at St. Andrews in 2000.

He owns the scoring records for 36, 54 and 72 holes at the toughest test in golf and he became only the third player to break 70 in all four rounds of the U.S. Open.

He did it at age 22, the same age as Nicklaus when he won the first of his record 18 majors. The two have become friends and The Bear appreciates what he’s been seeing.

Day ended up winning the real competition in this one the race for second, and has now been runner-up in the first two majors of the year. Kevin Chappell, Lee Westwood and Robert Garrigus tied for third at 6 under.

McIlroy kept his head down throughout this round, sticking to his mental game plan of thinking about golf shots, not championships. Finally, as he walked to the 18th green, he waved and smiled to a gallery on hand for one of the most dominating performances the game has seen.

He became only the sixth player to shoot under par in all four rounds of a U.S. Open. Earlier, Garrigus became the fifth player to accomplish that feat .

The dissection started right away, when McIlroy dug his approach shot on No. 1 out of a divot to 6 feet for a birdie. He made another one after hitting to tap-in range on the fourth hole to move to 16 under.
McIlroy didn’t give a stroke back to par until No. 12 but it was only his third over the entire tournament including his double bogey on No. 18 on Friday and a bogey on the 10th in the third round. As if to prove he was human, he three-putted the 17th green for another bogey. It was the first time he’d done that all week.

It was another calm, overcast day at Congressional, and there were more low scores to be had. The Blue Course has been taking a beating despite measuring 7,574 yards—second longest in U.S. Open history.

But nobody took advantage better than McIlroy, whose dad was in the gallery, watching his son take a bite out of the record book.


After the final tap-in, Gerry McIlroy met his son as he walked off the green.


GOGGINS WINS WICHITA OPEN
Australia’s Mathew Goggin won the Wichita Open on Sunday for his second Nationwide Tour title of the year and fourth overall, birdieing the final hole for a 2-under 69 and a one-stroke victory over Kyle Thompson.

Goggin, also the winner of the season-opening Panama Championship, finished at 18-under 266 on the Crestview Country Club’s North Course. He earned $108,000 to push his season total to $303,898, guaranteeing a top 25 finish for the season and a 2012 PGA Tour card. He also moved within a win of an in-season PGA Tour promotion.

The overnight leader made four birdies and two bogeys for an 8-under 276 total to finish seven strokes ahead of Daniel Denison of England, who shared second place with Peter Gustafsson of Sweden and Craig Lee of Scotland.

Zions was a runner-up at last year’s Karnten Golf Open on the Challenge Tour, and his previous best result on the European Tour was a ninth-place finish at the 2007 New Zealand Open.
Zions was briefly under pressure from Andrea Perrino of Italy, who made two birdies to pull within three shots of the lead. But the Italian had three consecutive bogeys after the turn to slip to fifth place, tied with six other players at 284.

Zions got some breathing room by making three birdies in a four-hole span to increase his lead to six shots after No. 11.

The 32-year-old Australian won by the biggest margin at this tournament. Christian Nilsson of Sweden had clinched the title by six strokes in 2009.

JI HEE LEE TAKES JLPGA EVENT
Ji-Hee Lee fired a 7-birdie 67 in the final round of the Nichirei Ladies to secure her 14th career JLPGA victory by 2 shots over Miki Saiki. The roller-coaster battle was decided over the final 4 holes in dramatic fashion, in which Lee birdied 3 of them and Saiki could only manage 2 and a bogey.

Na-Ri Lee and Junko Omote had gone low earlier in the day with a 66 and a 67, respectively, to stand as co-leaders-in-the-clubhouse at that same number, so the outcome was in serious doubt, but Lee and Saiki both birdied the par-4 15th to knock them out of the running. The tide turned in Lee's favor for good when Saiki bogeyed the long par 4 to fall back to -9 and Lee birdied the long par 3 to get to -11. After Lee matched Saiki's walkoff birdie, she had her 14th JLPGA win and first since last August.

IN OTHER NEWS
A 29-year-old man was hospitalized Thursday after collapsing along the 11th fairway at the U.S. Open.

The man fell to the ground near the spectator ropes as the group that included defending champion Graeme McDowell was about to play the hole at Congressional Country Club.

Assistant Chief Scott Graham of the Montgomery County Fire Department said the man was in serious condition when he was taken by ambulance to nearby Suburban Hospital. A state trooper and local police officer assigned to provide security for the players performed CPR, and emergency workers brought in a defibrillator.

McDowell’s group teed off, even as the man was being given chest compressions. McDowell stared intently at the scene as he walked past.

“We heard someone obviously was having some problems over there,” McDowell said. “You’re out there trying to do your best, but it certainly puts golf in perspective when you see someone obviously fighting for their life. All the people that USGA has in place this week for events like that, it’s great to see the paramedics reacting and doing the job they’re here to do. We obviously hope that person is doing OK right now.”

Heart attacks are often a concern at golf tournaments in the mid-Atlantic region because of the area’s high heat and humidity. Thursday’s weather was unusually mild for the time of year, with plenty of cloud cover and the high temperature hovering around 80.

There was a record 26 subpar rounds at the Open on Saturday.  The previous record for subpar rounds in the third round of a U.S. Open was 24, set at Medinah in 1990. Congressional could produce scores like this back when the Kemper Open was played here and no one would blink, but it’s now supposed to be rigged up for the toughest test in golf.

The U.S. Golf Association spent years planning for this weekend. All the greens were rebuilt. Tee boxes were moved back so far that they’re nearly bisecting other fairways, making it often confusing to figure out which hole is next without the aid of a map or a directional sign. It’s a whopping 7,574 yards from start to finish if all the back tees are used.

But last week’s stifling temperatures and humidity sent the heat index into triple-digit territory, stunting the growth of the rough, wilting the fairways and greens and putting the USGA behind in its preparations. The rain finally started falling on Thursday after play was under way softening up the course, and making the greens easier to shoot to.

The U.S. Open will return to Shinnecock Hills in 2018, heading back to a course that produced one of the most embarrassing final rounds in the tournament’s history.

Retief Goosen won by two shots over Phil Mickelson in 2004 after a final round marred by greens that were almost too fast to play. At one point, officials had to sprinkle the seventh green simply to keep balls on the putting surface.

Ernie Els played in the final group that day and shot 80. No one broke par in the final round and the average score was 78.7.

It was widely viewed as one of the worst days for the USGA, which prides itself on setting up the toughest courses in tournament golf. Even the USGA officials conceded they lost control of the course.

The new setup guidelines feature “graduated rough”—grass that’s grown longer and thicker the farther it gets from the fairway. The idea there is to penalize players more for shots that go further astray than those that miss the fairway by a foot or two. The USGA also started moving tee boxes around to better adjust to weather conditions that affect scoring.

The USGA is hoping the recent changes will prevent another debacle at Shinnecock, one of the country’s hallmark courses, which will host its fifth U.S. Open.


Listen to my podcast weekly at par3radio.podbean.com and at TGWG.podomatic.com
As well as on itunes
Send your questions and comments to talkinggolf@gmail.com
Posted by Gary Mack at 8:33 PM