DONALD TAKES MATCH PLAY EVENT
Luke Donald spoiled Martin Kaymer’s rise to No. 1 in the world by winning the Match Play Championship on Sunday with a performance so dominant he never played the 18th hole all week.

Not even the snow and sleet could stop Donald.

On a bizarre final day which began with snow covering the fairways, Donald pulled ahead for good with a birdie on the par-5 11th and a par on the next hole, eventually closing out Kaymer on No. 16 for a 3-and-2 victory.

The consolation prize for Kaymer is going to No. 1 in the career, which he assured by reaching the championship match.

Donald was in more dire need of this trophy, however.

It was his first win in America in five years, and it was only his second win worldwide since he captured the 2006 Honda Classic. The 33-year-old Englishman had done just about everything right except win.

He took care of that in a week like no other in the 13-year history of the Accenture Match Play Championship. Donald played only 89 holes in six matches and never trailed in any of them. In fact, he led after 81 of those holes.

Donald won his first World Golf Championship, and became the second player from England to capture the Match Play Championship. He goes to a career-best No. 3 in the world to continue a European resurgence in the ranking.

The next world ranking will be Kaymer, Lee Westwood, Donald and Graeme McDowell. It’s the first time since March 15, 1992, that the top four spots have been occupied by Europeans.

Matt Kuchar defeated Bubba Watson in the consolation match and will go to No. 10 in the world.

This Match Play Championship will stand out for reasons beyond golf.

A late winter storm dusted Dove Mountain with nearly an inch of snow, and the fairways were blankets of white in the morning. Donald looked out his hotel room and suggested on Twitter that a snowball fight determine who had honors on the first tee.

The snow had melted when they teed off, although dark clouds on the horizon loomed. Sleet began falling when the championship match reached the third green, and play was stopped when sleet covered the fourth fairway.

After about 10 minutes, when the fairways turned from white back to green, play resumed.

Donald seized on the moment. Already 1 up from his 18-foot birdie on the par-5 second, he watched Kaymer hit a fade over the bunker to about 7 feet, then answered with a shot into 2 feet for a conceded birdie. Kaymer missed, and Donald was 2 up.

On the next hole, Kaymer pulled his drive into the desert and fell another hole down.

Donald three-putted for bogey from below the ridge to lose his first hole, and Kaymer squared the match at the turn with a birdie on the eighth and a bogey on No. 9, where Donald hit his approach into a desert bush and had to return to his original spot in the fairway.

Kaymer had all the momentum and blistered a tee shot down the middle, while Donald went from a scrubby lie in the desert to a waste area short of the green. Donald, however, blasted out to 3 feet for a conceded par.

He took the lead on the 11th by making an 8-foot birdie putt as Kaymer missed his birdie from just inside 6 feet, and Donald regained all the moment on the next hole when Kaymer came up short into the sand and took bogey.

Donald went 3 up on the 15th when Kaymer missed a birdie putt from inside 4 feet, and the “Germanator” conceded the match on the 16th when he failed to hole a 30-foot birdie putt.

It was the first time the championship match was decided over 18 holes instead of 36.

WAGNER WINS THE "OTHER TOURNAMENT"
Johnson Wagner won the Mayakoba Golf Classic on Sunday for his second PGA Tour title, beating Spencer Levin with a par on the first hole of a playoff.

Champions Tour player John Cook shot a 66 to finish third at 14 under.

Wagner opened with rounds of 69, 66 and 65 to take a one-stroke lead over Stroud into the final round.

Levin, winless on the PGA Tour, birdied five of the first eight holes. He dropped a stroke on No. 12, then rebounded with birdies and Nos. 13 and 17.

Levin struggled in the playoff on the par-4 18th.

The 53-year-old Cook had his best PGA Tour finish since tying for third in the 2006 St. Jude Classic. He won the Champions Tour opener in Hawaii in January.


Webb was three strokes behind Arimura after a bogey on the 10th. But she started her string of birdies on the next hole to grab a lead she would never relinquish. 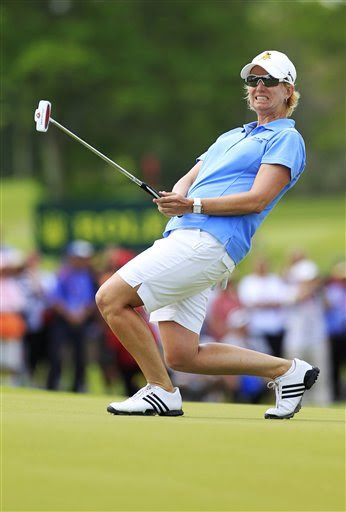 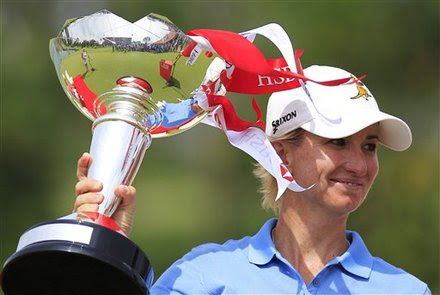 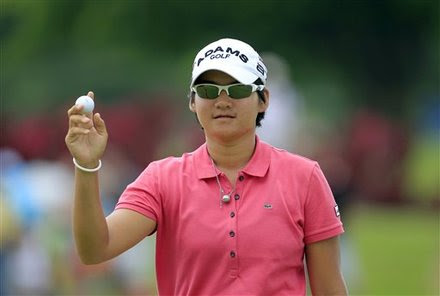 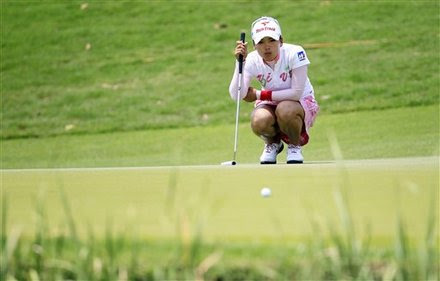 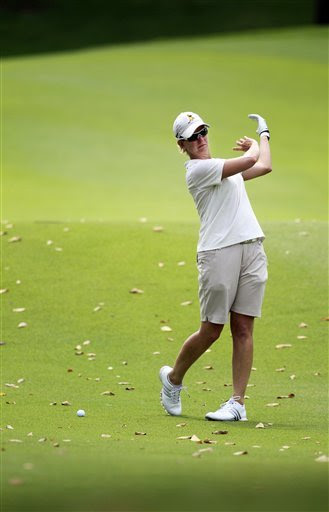 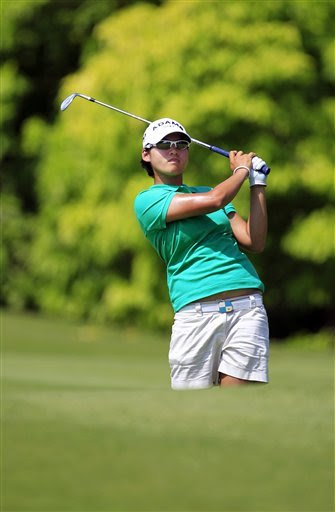 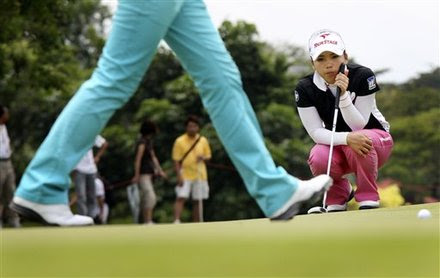 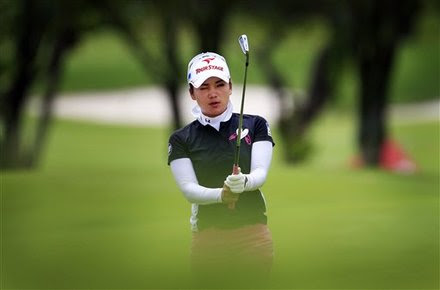 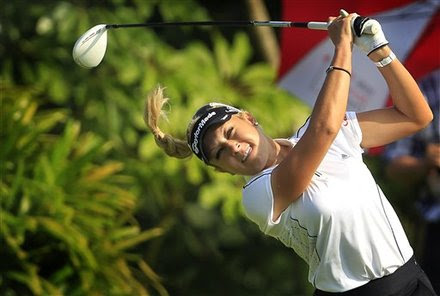 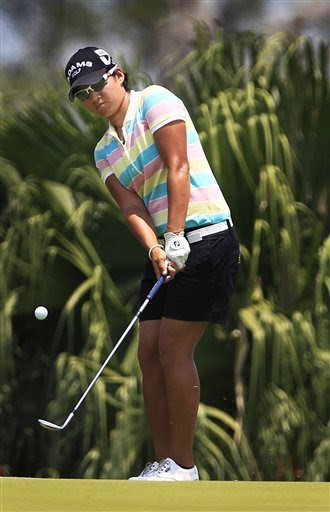 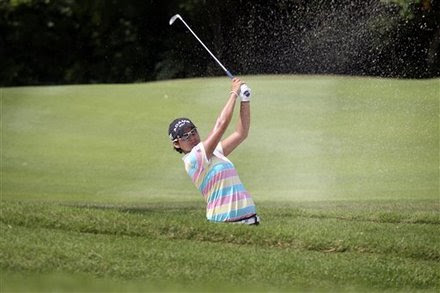 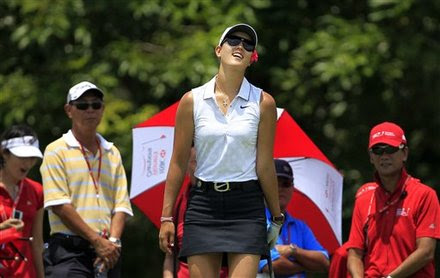 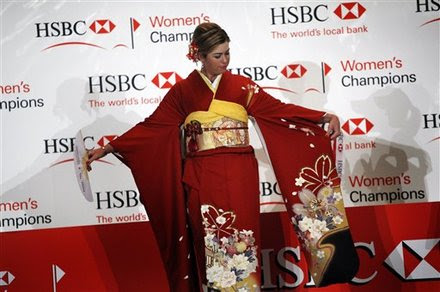 Paula Creamer of the United St…
AP - Feb 22, 1:30 am EST
Arimura had led from the first round and had a one-stroke advantage over Webb going into the final round. The 23-year-old Arimura, who has seven Japan LPGA victories, has yet to win an LPGA tournament.

Top-ranked Yani Tseng of Taiwan jumped into contention with five birdies on the front nine, but couldn’t keep up that pace and finished in third place, three shots behind the winner.

Tseng was coming off a string of three victories in three weeks, earning the top ranking after wins at the Australian Women’s Open and Australian Ladies Masters on the Ladies European Tour in February and last week’s LPGA Thailand event.

Japan’s Ai Miyazato, who won the tournament last year, finished tied for 14th at 2 over. Michelle Wie  finished 8 over while Juli Inkster was a full 20 shots back.

GOGGIN IS VICTOR IN NATIONWIDE OPENER
Mathew Goggin of Australia won the Nationwide Tour’s season-opening Panama Championship, shooting a 2-under 68 on Sunday for a two-stroke victory over countryman Alistair Presnell and Darron Stiles of the United States.

Stiles finished with a 66, and Presnell shot a 73.

Erik Compton, the two-time heart transplant recipient who had the lead midway through the final round, shot a 75 making a double bogey on the final hole to tie for fourth with Tommy Biershenk (68) at 8 under.


IN OTHER NEWS
Organizers of the annual LPGA Tour stop in Springfield, Ill., say State Farm is dropping its sponsorship after this year.


Kate Peters, executive director of the LPGA State Farm Classic, said Friday that she was disappointed by the decision. She said the tournament will try to find a new sponsor.

State Farm has sponsored the tournament for the past 19 years. A message left for a spokeswoman with Bloomington, Ill.-based State Farm was not immediately returned.

This year’s tournament is in June.

After almost a year in a prison camp for avoiding taxes golfer Jim Thorpe is out and ready to get back to playing golf.

He was recently interviewed for GolfWeek by Jeff Rude. It"s Thorpe's first interview since being released from a Federal Prison Camp in Montgomery, Alabama into a Florida halfway house last month and he is very open and honest.

Thorpe is also looking forward to getting back on the Champions Tour sometime in April.

The Danish Golf Association, say that lost golf balls pose an environmental hazard, taking up to 1,000 years to decompose and releasing poisonous heavy metals. These heavy metal attach “themselves to the ground sediment and poison the surrounding flora and fauna” when in water. Heavy metals used in golf ball production include tungsten, cobalt and lead.

Now you can follow me on twitter at twitter.com/talkgolfgary
And on Facebook at par3prods
Listen to my podcast weekly at par3radio.podbean.com
Send your questions and comments to talkinggolf@gmail.com
Posted by Gary Mack at 8:20 PM