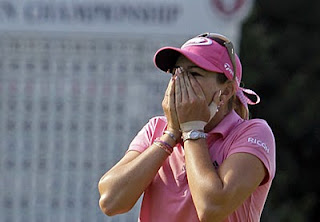 THE CREAMER RISES TO THE TOP

Paula Creamer won the US Womens Open playing superbly down the stretch at Oakmont to win her first major title.

She, went into the final round at sunny Oakmont Country Club with a three-shot lead that never went below two shots. She played 23 holes on Sunday with a sore left thumb, including the final five holes of the weather-delayed third round.

Her final-round, 2-under 69 gave her a 3-under 281 for the tournament. Na Yeon Choi of South Korea and Suzann Pettersen of Norway tied for second at 1-over 285.

Creamer, coming off surgery on her thumb earlier this year, winced visibly after hitting a shot at the 12th hole, a hole she bogeyed. But she came back with a birdie on 13 and just took charge the rest of the way .

Alexis Thompson, the 15-year-old Floridian who is the next potential big star in women’s golf, trailed by five before taking a double bogey on No. 1. She was the second-longest hitter but was held back by a series of three-putts while tying for 10th.

Creamer joins 2007 winner Cristie Kerr as the only Americans to win this tournament in the last six years.

The ladies are off next week but head to France for the Evian Masters in two weeks. Ai Miyazato
defends.


STRICKER DOUBLES UP AT JOHN DEERE

Steve Stricker won the John Deere Classic for the second straight year, holding on for a two-shot victory after leading by seven strokes.

Stricker couldn’t match the shot-making that allowed him to record the lowest 54-hole total in PGA Tour history. But he came through with a critical birdie after driving into the trees on No. 17 the second straight day he put his ball there and closed with a 1-under-par 70, just enough to beat Paul Goydos.

Stricker finished with a 258—26 under and a record for the tournament. Goydos, who shot a 59 in the opening round, shot a solid 66 but still fell short of beating Stricker, who won for the second time this year and ninth time in his career.

Jeff Maggert shot a 70 to finish six strokes back.

The guys head to St. Andrews for the British Open as another major is here. Stewart Cink defends his title. For those who did not qualify there is the Reno- Tahoe Open. John Rollins was the 2009 winner.

Edoardo Molinari of Italy claimed his first European Tour victory at the Scottish Open, shooting a 3-over 74 to beat Darren Clarke by three shots Sunday.

Scoring was very high after a long spell of rain at Loch Lomond, where Molinari finished at 12-under 272.

Clarke, of Northern Ireland, had begun the day a shot behind Molinari but had a 76. Frenchman Raphael Jacquelin closed with a 68 to place third at 8 under.

Molinari’s younger brother Francesco Molinari , Stephen Gallacher of Scotland and Peter Hedblom of Sweden trailed Jacquelin by a stroke. John Daly had a 77 and finished 14 shots off the pace.

The victory lifted Molinari into sixth place in the world ranking points table that will provide the first four members of this year’s European Ryder Cup team.

British Open next week is where the world meets.

Two big names had early departures from tournaments this week.

Michelle Wie had two rounds of 82-76-158, putting her 16-over during her worst performance in the US Womens Open. She didn’t come close to reaching the cut line of 10-over 152.


Phil Mickelson missed the cut Friday in the Scottish Open. Again he missed the opportunity to get to # 1 in the world rankings.

Mickelson hit three tee shots on the 18th hole midway through his second round on his way to a quintuple-bogey 9. He never got those shots back in his round of 3-over 74, missing the cut by one shot.

Greg Norman has decided against going to St. Andrews this year, pulling out of the British Open and the Wednesday exhibition of former champions on the Old Course.

He was replaced in the 156-man field Friday by Jason Day of Australia.

In an effort to get a better field of players before a major the John Deere folks started offering a charter flight for those who qualified for the Open and decided to play the Deere Classic.

The charter is non-stop, features 100 first-class seats and costs $1,250 per person, which is donated to the Birdies for Charity foundation, and the results are easily quantifiable.

This week’s John Deere Classic features three players in the top 20 in the World Golf Ranking The exact same number of top-20 players, by the by, that were in the field at last week’s AT&T National, an elite invitational unencumbered by the long shadow of major championship.

This idea worked so well other companies are getting into the act. The Travelers Championship added a charter from the U.S. Open to Hartford, Conn., and has enjoyed similar results.

Listen to my podcast weekly at par3radio.podbean.com
Send your questions and comments to talkinggolf@gmail.com