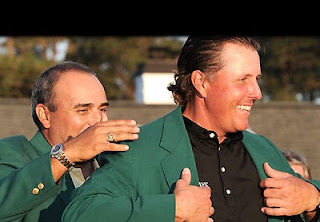 
Phil Mickelson won his third green jacket defeating Lee Westwood by three strokes on Sunday. His greatest joy came when he saw his wife Amy behind the 18th green  for the first time in 11 months after diagnosed with breast cancer. This victory was for family.

Last year, it was the 12th hole that did in Phil,this year it was a birdie on the 12th that catapaulted Mickelson to  victory.

Mickelson made two remarkable par saves from the trees, seized control with a 15-foot birdie putt in the heart of Amen Corner and then made a gutsy play with a 6-iron off the pine straw and over Rae’s Creek on the par-5 13th to set up a birdie.

Though he won by 3 it was not easy getting there. Mickelson arrived at Augusta National without a top five finish all year.

He opened with a 5-under 67. He closed with two more 67s on the weekend.And it was Saturday's stretch of holes that got the crowd going and Phil's game as he went eagle - eagle- birdie to jump into contention and a share of the lead.

The final round started with Westwood one stroke up. The lead stayed that way as the players jockeyed back and forth. Westwood stayed tough, K.J. Choi made a run at one point having a share of the lead. Anthony Kim shot a 65 and got within one but came up short. But it was Mickelson who remained tough and hit the pressure shot when he had to.

He took the lead for good at the 12th with a birdie and then a fantastic shot off the pine needles ,between trees, on the 13th.

Mickelson was steady the rest of the way—another birdie at the par-5 15th, pars at the tricky 16th and 17th holes and the birdie on 18.

Anthony Kim came into Sunday seven shots off the lead, and he didn't look to be much of a threat. But
from 13 to 16, Kim recorded birdie, birdie, eagle, birdie, going five under par and immediately jumping from into themix. He was just one off the lead, and  could have caught Left. . But a wide tee shot on 17 and a greenside bunker on 18 ended any hope.  Kim finished par-par to record a 65, still the lowest round of the tournament.

Lee Westwood went into the final round with a one-stroke lead, but a mediocre front side held him to a 1-under 71 as Mickelson pulled away the win.

The week also stirred our memories as Fred Couples and Tom Watson both, not only made the cut, but were in contention and a factor in the tournament.

Tiger Woods played his first tournament since word of a sex scandal came out and engulfed his life. Incredibly he contended but fell short with so-so play on the weekend. He played some great shots but had his share of errant shots that hurt his chances. Still he managed a fourth place finish.

Sunday, however, belonged to Phil Mickelson

The exemption was announced a day after the 60-year-old Watson turned in another impressive performance at a major, tying for 18th at the Masters. In his previous major, he lost in a playoff to Stewart Cink in the British Open at Turnberry.


That's it for this week.

Check out my podcast at http://par3radio.podbean.com