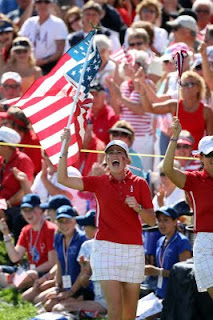 It was a very exciting Sunday as Europe and the US fought for the Solheim Cup. What was a tight contest , ended in a rout as the US mounted a comeback and took back the Cup. The Americans won the singles 8-4, making the final score 16 - 12.

Michelle Wie had the best week going undefeated in her first Cup action. Juli Inkster, the oldest member of the team, led the comback on the back nine.

Inkster struggled most of the day, down 2 to Gwladys Nocera through 12 holes. She managed to hang in and made birdies on 14 and 15, and evened the match with a solid shot into 12 feet on the par-3 16th. She actually went 1 up when Nocera missed a 6-footer for par on the 17th, but bogeyed 18.

Still, she’d gotten the United States that half-point. It was quite a finish for what Inkster insists will be her last Solheim Cup.

With Morgan Pressel's win over Anna Nordqvist the Cup was clinched and the party was on.

The ladies reconvene in Oregon for the Safeway Classic. Cristie Kerr is the defending champion.

It appeared that this tournament just did not want to get started, and then it looked as if it would not end, but it did with Ryan Moore rolling in a birdie putt on playoff hole #3 to win the Wyndham Championship over Kevin Stadler.

Play stopped and started three times during the first three days due to lightning and heavy rains. The combined 9 1/2 hours in weather delays meant none of the first three rounds finished before sundown, forcing players to return to the course each morning to finish their rounds.

After vaulting up the leaderboard with five consecutive birdies on the back nine, he had two chances in the playoff to seal the victory after his approach on No. 18 landed in the middle of the green and rolled to 6 feet. He sank that putt for his first victory in his 112th event.

Stadler’s second shot on the third playoff hole skipped off the back of the green. He chipped within 20 feet, but his putt missed to the low side of the cup.
That cleared the way for Moore to make his first putt, pick up his winner's check and take home 500 FedEx Cup points for winning the final tournament before the playoffs start later this week.

Stadler, Moore and Jason Bohn forced the playoff after they were tied at 16-under 264 through 72 holes. Bohn was eliminated on the first playoff hole after he had trouble escaping the greenside bunker on No. 18 and his first try rolled back into the sand.

Sergio Garcia blew a three-stroke lead midway through the final round, shot a 70 and finished at a stroke out of the playoff.

Now the Tour gets ready for The Barclays the first leg of FedEx playoffs. Vijay Singh won last years tourney as well as the FedEx Cup.

(AP ) Mike Reid sank a 12-foot birdie putt on the first playoff hole Sunday to defeat John Cook and give him his second career victory, and second major, on the Champions Tour. He also won the 2005 Senior PGA Championship.
Cook’s approach shot on the playoff hole, No. 18, came to rest about 15 feet away and his downhill putt for birdie missed just left.

Reid shot a final-round 70 and Cook had a 69 to finish at 16-under 272.Cook, who was two strokes behind leader Brad Bryant going into the final round, birdied the par-3 No. 17 hole to take a one-stroke lead to the final hole. But he hit into the bunker, settling for a bogey and forcing the playoff with Reid, who made par on the hole.

The Boeing Greater Seattle Classic is next up. Tom Kite defends.

(AP)—England’s Simon Dyson came from six shots back to win the KLM Open, beating Ireland’s Peter Lawrie and Sweden’s Peter Hedblom in a playoff Sunday.
After six birdies in his first 12 holes, Dyson matched a course record with a 7-under 63 and then birdied the first extra hole for his second title at the KLM Open.

Michael Sim has played his way onto the PGA Tour.

The Australian shot a 4-under 67 Sunday to win his third Nationwide Tour event this season, taking the Christmas in October Classic by two strokes.

Juli Inkster, the oldest woman to play in a Solheim Cup, announced that she has made her last Solheim Cup appearance as a player.

The Hall of Famer said she knows she won’t play in another but looks forward to someday being a captain.

Inkster, 49, said that while she isn’t officially retiring as an LPGA player, she’s going to take a significant step back in her playing career.

Inkster was 1-2-1 this week, making her the all-time American points leader in Solheim Cup history with 18 points. She's 15-10-6, a record built on teams that won five Solheim Cups and lost three.

Tiger will get another shot at Y.E. Yang at the HSBC Champions in November, along with defending champion Sergio Garcia and world No. 2 Phil Mickelson.

Others competing in the tournament Nov. 5-8 in Shanghai include Paul Casey, Henrik Stenson, Stewart Cink and Padraig Harrington.

FedEx playoffs begin. Give it a watch.

See you next time.