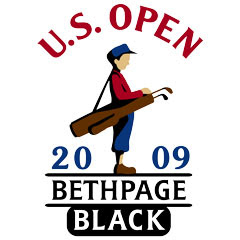 Lucas Glover won the U.S. Open in Farmingdale NY. In a tournament that was plaqued by weather problems and took a day longer to finish then usual, Glover was the last man standing. He came into today tied for the lead with Ricky Barnes. Both men started off poorly, and, began coming back to the field,
Tiger Woods, Ross Fisher, and Hunter Mahan all started to challenge but fell back. Phil Mickelson, and David Duval mounted the biggest charges even tying for the lead before they fell back.
Mickelson, tied Glover with an eagle on 13 but bogeyed 15. Glover also bogeyed 15 to again tie Mickelson. Duval, who had a terrible start to his round, fought back by running off three straight birdies on the back nine tying Glover and Mickelson at -3.
Glover birdied 16 to go -4 while Mickelson bogeyed 17 as did Duval dropping them two strokes back.
Glover who was steady all week, hung on and parred his way in to claim the Championship Trophy.


If I may just some thoughts on the week. It's a shame the Tournament was affected by the weather. The course was in great shape but the heavy rainfall took away the toughness of the course. Like the sun , the Black never got to shine.

David Duval played a great tournament and maybe back to form or close to it. He has truly risen from the ashes.

Phil Mickelson was playing inspired golf. He departs now to be with his wife during her treatment. Good luck, Amy and Phil get well soon. I hope we do get to see Phil later this season.

With all the starts and stops due to the weather the tournament never got into a good flow until the final nine holes.

The fans were great and the USGA should get the Open back here as soon as it can.


Next week the other tours will return and the PGA moves on to Connecticut for the Travelers.
Stewart Cink defends.


That's it for this week.

Don't forget my podcast at http://par3radio.podbean.com/
Posted by Gary Mack at 9:00 PM