Back again for week 7.

Danny Lee ,an amateur from New Zealand, and the reigning US Amateur Champion won the European Tour event the Johnnie Walker Classic in Australia.Lee,birdied the final two holes and four of his last six for a one stroke victory.

Loren Roberts birdied three of his last four holes to win the Ace Group Classic on the Champions Tour. He defeated Gene Jones by one stroke. For Roberts it was his first win since June 2008

Steve Stricker had a two stroke lead going into the 18th but bogied the hole while Phil Mickelson birdied the 16th and 17th and parred the 18th to win the Northern Trust Openfor the second year in a row. The victory was Phil's 35th career win.

By now, everyone knows that Tiger Woods will make his return next week at Accenture Match Play Championships. There will be no end to the anticipation of Tiger returning. Tiger felt it was time and he is ready to comeback. After his break with longtime sponser Buick, Tiger will be sporting an AT&T golf bag this season. AT&T is the sponser for Tiger's event in Washington DC

It is going to be interesting to see Tiger back and if there is any rust on his game. With Phil winning this week is ready to step up and take on all comers?

The LPGA as well as the Nationwide Tour had the week off.

Next week the ladies are in Thailand,the Nationwide Tour goes Australian, the Champions Touris off and PGA has the Accenture and the Mayakoba Golf Classic, for the Europeans that did not make the Accenture there is the Indonesia Open.

TIP OF THE WEEK

Don't forget to download my podcast at http://par3radio.podbean.com/
Send your comments / questions to gary21753@gmail.com
See you next week with Tiger's return.
Posted by Gary Mack at 7:43 PM No comments:

TALKING GOLF WITH GARY #006b

“I’m now ready to play again" and with those words we now know when the #1 golfer in the World will return to action. Tiger Woods is coming back at the Accenture Match Play Championships tournament next week. My buddy Gerry predicted it and now it's true. Next week Tiger will be back.

Don't forget to download my podcast at http://par3radio.podbean.com
Send your comments / questions to gary21753@gmail.com
Posted by Gary Mack at 6:18 PM No comments:

TALKING GOLF WITH GARY #006a 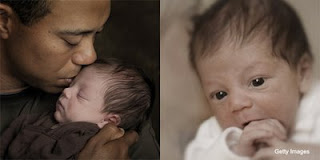 In this special edition I bring you the first photos of Tiger Wood's and his new baby Charlie. These pictures were released by Tiger and his family. Great to see all well and happy. Now when are you coming back Tiger?
See you next time
Don't forget to download my podcast at http://par3radio.podbean.com
Send your comments / questions to gary21753@gmail.com
Posted by Gary Mack at 10:07 AM No comments:

Sunshine but still cold out there

Dustin Johnson won for the second time after rain shortened the AT&T National Pro - Am at Pebble Beach. Johnson built a four shot lead on Saturday that figured to give him a cushion going into the final round but torrential rains and wind gusts left The PGA tour no choice but to shorten the tournament and declare Johnson the winner. Next week Phil Mickelson defends at the Northern Trust Open at the Riviera CC.

Mike Goodes, who turned pro only 2 years ago, won his first career Champions Tour title taking the Allianz Championship. He held off Fulton Allem for the one stroke victory. The tour moves to Naples florida for the ACE Group Championship. Scott Hoch defends.

Michelle Wie had the lead heading into the back nine but faltered and Angela Stamford stormed to the lead to win the SBS Open. It was Angela's third win in her last seven starts. The ladies are off next week moving on to Thailand for the Honda LPGA Thailand.

Anthony Kang of the United States ended an eight year victory drought by rolling home a short birdie putt at the final hole to emerge from a tightly bunched field for a one stroke victory at the PGA European Tour's Maybank Malaysian Open.

In other news
We'll have an idea of when Tiger will return as Friday at 5pm is the deadline to enter the Accenture Match Play. Keep an eye on that one.

Will Phil Mickelson get his game together to defend at Riviera this week. Phil won there last year and was the runnerup in 2007 so it'll be worth watching what happens.

The Golf Channel signed a 10 year deal with the LPGA that will make the network the exclusive cable home of the ladies tour beginning in 2010.

TIP OF THE WEEK
When you are in the sand, the number one priority should be getting out in one shot. Get fancy later when you have mastered this.

Don't forget to download my podcast at http://par3radio.podbean.com
Send your comments / questions to gary21753@gmail.com

Until next time
Posted by Gary Mack at 3:18 PM No comments:

A taste of spring, but winter is not done yet.

On The Tour John Rollins let the Buick Invitational slip away and Nick Watney swooped in by birdieing two of his last three hole to take home the title.Camillo Villegas who led the early rounds had a chance but three putted from 10 feet on the sixth and made bogey on the 17. Phil Mickelson did make the cut but played poorly and finished down on the list. Watney finished strong to take his 2nd PGA title,"I knew we had some good holes to play, and I definitely didn’t want to give up,” Watney said. “I just tried to keep my head down and give myself chances, and I was able to make some putts.”

Next week on to Pebble Beach.

Vance Veazey beat Garrett Willis on the second playoff hole to capture the first event of the Nationwide Tour event in Panama.

The European Tour had the week off as did the Champions Tour.

The LPGA also was off but a lot of news around the LPGA this week:

The LPGA kicks off their season in Hawaii with the SBS Open.Michelle Wie makes her debut as a tour member having gone thru Q school and earning her card.

Anna Rawson made an unfortunate choice of words in a radio interview this week. Rawson used a disparaging remark about lesbians in describing past LPGA leaders. Anna open mouth insert foot.

Betty Jameson,one of the founding members of the LPGA past away on Saturday

The LPGA has found a replacement for the Safeway International. Papago Golf Course will host the Phoenix LPGA International on March 26-29, after Safeway pulled out as a sponsor for the tournament held the past five seasons at Superstition Mountain Golf and Country Club.

This just in Tiger Woods and his wife Elin are proud parents of a second child a bouncing baby boy, Charlie Axel Woods born Sunday 2/9/2009. Congratulations to the happy couple.

Is it just me or does Phil Mickelson look lost out on the course. I get the feeling he hasn't got a clue what is wrong with his game or what to do to fix it. Just a thought.

My buddy Gerry predicts Tiger will return to the Tour for the WGC Accenture Match Play Championship the last week of February. I with you Gerry.

TIP OF THE WEEK
Your putting swing should be a smooth, pendulum like action with no wrist break.Swing with your shoulders and you should always keep your head down.

Don't forget to listen to my companion podcast at; http://par3radio.podbean.com/And you can email me at gary21753@gmail.com


Until next week. Bye,bye.
Posted by Gary Mack at 8:52 PM No comments:

Sunshine, though still cold temps, though it is nice to see some bright sunlight

The SuperBowl just ended so congratulations to the Pittsburgh Steelers on their hard foughtvictory over the Arizona Cardinals.

It's "Captain Monty" now . "It’s not just an honor but a huge responsibility as well,” Colin Montgomerie said Wednesday after being chosen to captain Europe’s team for next year’s Ryder Cup in Wales."It is important we do everything we can to claim back the Ryder Cup in Wales in 2010.”

Phil Mickelson, Anthony Kim, and J.B.Holmes all enjoyed the big game at home as they failed to make the cut at the FBR Open this week in Arizona. Kenny Perry,birdied the 17th to take a one stroke lead, but bogeyed the 18th to go to a playoff with Charley Hoffman. In the playoff both players struggled thru but Kenny Perry sunk a birdie putt on the 3rd playoff hole to take home the victory. It's Perry's 13th career win and his first this year.

In other news:Tiger will not be in the Buick Invitational next week at Torrey pines.

Ginn Resorts has terminated all golf sponsorship. Ginn was asponsor of the LPGA as wellas a Champions tour event. The PGA Tour has answered by suing Ginn Resorts citing breach of contract.

THE TIP OF THE WEEK
From GolfImpactTraining.Com

Always aim at a target
A simple golf tip but one that gets overlooked : Aiming at a target during practice will make you a better golfer and carry over to your golf game.When you're on the practice range, don't just see how far you can hit the ball. Pick a target and aim for that target. First of all it will make your golf practice more fun and challenging.
Secondly - that's the object of the game. To hit the ball where you want to hit it. You'll improve just as much when practicing the short game as when practicing the long game.


I'm feeling a bit under the weather this week, so I will cut it short for now. Be sure to check out my podcast at:
http://par3radio.podbean.com/


Until next time.
Posted by Gary Mack at 6:13 PM No comments: